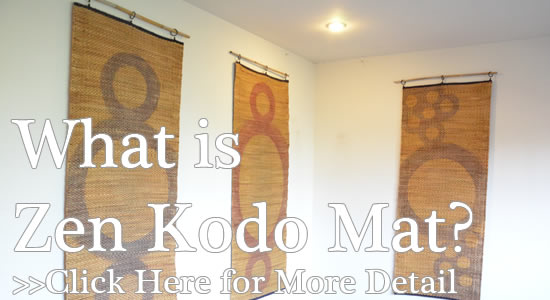 Fumie and Kentaro Mune, a Japanese Zen Artist and Curator Couple Visit Lower East Side, for their First Exhibition in NYC

Japanese Zen artist couple, Fumie and Kentaro Mune, have announced to hold an exhibition, named “One Yoga Mat Revolution” on 6th, 7th and 8th October at Miranda Kuo Gallery on Lower East Side, NYC. This exhibition will feature some of the couple’s renowned yoga mat art pieces, such as Zen Kodo mat. Wanderlust, one of the largest US yoga online media outlets in the world, described Munes’ mat pieces as “a new dimension of customary Zen art”.  Their work is also described as “A yoga mat to achieve ecology, empowerment and art” by Tokyo Shinbun in an article of 16th August 2017, a major metropolitan newspaper of Japan. As the part of this event, the Mune couple will produce creative and inspiring artworks, performances and workshops with locals and visitors of NYC. All events in the 3 days exhibition will be free of charge to attend.

The Munes, who opened the world’s first yoga mat gallery, have an established track record of delivering successful workshops and exhibitions in Bangkok and Tokyo, and their arts and philosophy have attracted attention throughout the world. Their art activities have been covered by various world-renowned media outlets. The Munes are also established yoga teachers and have published multiple books, one of which was ranked as an Amazon Japan best seller in 2016. The Mune’s most recent book, titled “One Yoga Mat Revolution,” was published in Japan in January 2017.

The theme of this exhibition, “One Yoga Mat Revolution,” which is the same as their recent book’s title, features the Zen Kodo mat. Its purpose: To serve as a sanctuary and healing space, offering respite to the bustling city. The Zen Kodo mat is part-art installation, part-meditation tool, designed to help expand consciousness and awareness in day-to-day life. Munes’ eco-friendly handmade yoga mat doubles as both yoga and meditation mat, carefully crafted in Zen and Japanese tradition.

The idea for the Munes’ all-natural, sustainable mat stemmed from the realization that a large percentage of the world’s 30 million yoga practitioners use mass-produced, chemical-laden mats. Their mats are hand-woven with water hyacinth and jute.  ICUN* reports that a serious impact of Water hyacinth which damages the local eco-system all over the world, listed as one of the “100 of the World’s Worst Invasive Species”.  The fact moved the Mune couple to make yoga mats with water hyacinth to contribute to preserve the local environment and also to accomplish the sustainable development of rural area of South Eastern Asia. Their mats are woven by Northeastern Thai rural women’s group. The Zen artwork is then painted with butterfly pea flower (blue) and persimmon (kaki) tannin (red brown), with finishing touches in Japanese charcoal ink.

The reason why the mat itself is made of the earth’s materials is to support a grounding, spiritual practice for any yoga and meditation practitioners.  For this purpose, the Munes’ concept of perfect yoga mat for modern people cannot be completed without Zen art. It is because of their background of practical Zen, Buddhism, Shintoism and Teaism-also known as Japanese tea ceremony. “Our mission is to reinstall art into today‘s yoga and meditation. To deepen meditation, Zen art functions as a gate for one to go back to ‘child’s mind’.  To reach this state of mind is essential in Japanese Zen tradition.  I think this is what Daisetsu Suzuki calls it as ‘Beginner’s Mind’,” says Fumie Mune.

The exhibition features a range of drawings, paintings, three-dimensional works, music pieces, and videos. The Munes will hold art events and workshops throughout the exhibition period, and visitors are invited to contribute to participatory art pieces.